For anyone who wasn’t around in 2001 or familiar with the conditions in the gaming industry at the time. It’s hard to describe the impact and upheaval of Metal Gear Solid 2 when Hideo Kojima came up with an unforgettable adventure. The title provided gameplay mechanisms in an environment with an unprecedented level of interaction and realism. Not to mention the story touching on thorny political issues that most games did not dare approach before.

MGS 2 is still one of the greatest games of all time and its influence lasted for nearly 20 years to include recent games. And today we review with you 10 information in our Top 10 series of articles that will help you appreciate all the effort, thought and hard work that went into this masterpiece.

Warning: Some of the following details may be considered spoilers of the game, so be aware.

It was supposed to offer multiplayer modes

In Hideo Kojima’s early vision for the project, multiplayer was apparently supposed to be supported over a local network. And according to the original design document, which was translated into English by Jesse Johnson, the split-screen phase was referred to screen). Which would have seen either direct battle between players against each other, or the hide-and-seek mode which is a direct reflection of the gameplay. It’s easy to imagine the difficulty of creating a split-screen multiplayer in a complex tactical game in the first place, But thankfully, online multiplayer competitions are finally coming to the series with the Metal Gear Solid 3 Subsistence part.

Even with the rise of gaming journalism and the focus on preserving the legacy of video games. Many important pieces of industry history have been lost over the past years, which makes Metal Gear Solid 2 so important. 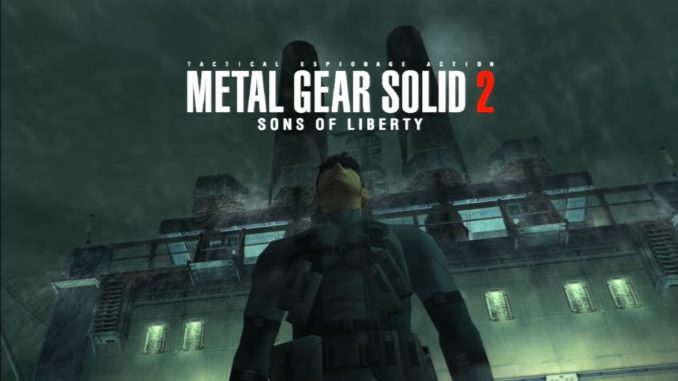 The Document is an interactive documentary released for PlayStation 2 on September 12, 2002 in Japan and September 24 of the same year in North America. It allows the player to view all the character models and designs of the virtual world in the game and listen to the soundtrack. And in return it provides a huge number of details and information related to the second part, including the entire scenario. As well as the players can examine each cinematic scene and control the shooting camera. Unfortunately, did not These features are reintroduced in the HD version.

Solid Snake introduces himself as Iroquois Pliskin, however, players were able to instantly recognize him. Yoji Shinkawa’s original character art design came with blonde hair and the goal was for the player to wonder if Pliskin was really Solid Snake or not. Eventually this idea was abandoned and Pliskin’s identity became clear from the start.

Raiden is designed to attract women!

It takes a separate article to talk about Raiden’s importance in Metal Gear Solid 2 in terms of the themes and messages the game is trying to focus on. There’s also a simpler reason to make him a main character during most of the game’s action. As his different looks and personality are designed to appeal to a wider audience.

Snake was awkward and straightforward, while Raiden was designed as a kinder character. And the design document specifically mentions that the character is intended to attract more women to experience the game.

For a short while during development, the game was supposed to be called Metal Gear Solid III. With the latter part of the title representing the three tallest skyscrapers in New York City. And not the number 3 in Latin as some think.

In the end, a traditional title was used so as not to distract players, although only a small part of the story takes place in Manhattan and actually takes place on the Hudson River. The title still focuses on the famous city clearly, as the game deals with the fate of the region and freedom Information. Therefore, is nowhere of greater cultural and financial importance than the capital of money.

Enthusiasm for the game kicked in straight away as soon as the first trailer was released. The graphics were incredibly impressive. And players had the chance to get a feel for part of the title’s action over six months before its release thanks to the demo included in Zone of the Enders. Which was also produced by Kojima.

The demo includes the introduction of the game right up to the first boss battle with Olga. And for those who have stuck with the game have experienced countless demos. Discovering all the things that Snake can do by interacting with the surroundings.

Sharks were part of the game

The original design document includes many other ideas. That didn’t make their way to the final game for a number of reasons. For example, the Hudson River sharks were supposed to be serialised in a mission. Before Kojima decided to drop that part.

Kojima most likely made this decision after his team told him that sharks don’t swim in the Hudson River. Those familiar with Kojima’s work know that this isn’t the wildest or wildest idea ever included in one of his games. But he eventually listened to reason and decided to give up. that part.

After the attacks of September 11, 2001, some parts of the game were changed or censored to be sensitive to recent events. With a scene depicting Arsenal Gear (a mobile fortress developed for the US Navy. With the ability to monitor, block, and tamper with internet communications) removed and it It crashes in Manhattan. And all the flags in Federal Hall (the birthplace of the US government on Wall Street) have been removed.

To be clear, MGS 2 was not the only game that was subjected to strict censorship after the events of September 11. But many titles witnessed major changes in the same period for the same reasons, most notably GTA 3. But it is unfortunate that the deleted scenes from the original game. Did not make their way to the version Enhanced version released in 2011.

The events of the original game were about Iraq or Iran

Settling in New York City, the game was supposed to take place in Iran.  Iraq with a focus on nuclear weapons inspections. Where Snake has to thwart a terrorist plot at one of these facilities.

The region and story were changed in part due to Kojima’s concerns about touching on a region with little political stability. But it seems that 10 years was enough for the Japanese director to change his perspective. After Meta Gear Solid V: The Phantom Pain partially touched on Afghanistan during the Soviet-Afghan War.

Everyone knows Kojima is a movie buff and avid reader. And several novels were a huge influence on the development of Metal Gear Solid 2.

The design document cites Paul Auster’s City of Glass as having a major influence on the game’s events. And it goes beyond sharing the game’s names for some of the characters from the novel. But City of Glass treats identity in a similar way to Metal Gear Solid 2. Albeit in the context of a novel A detective. Not a military drama that focuses on science fiction.